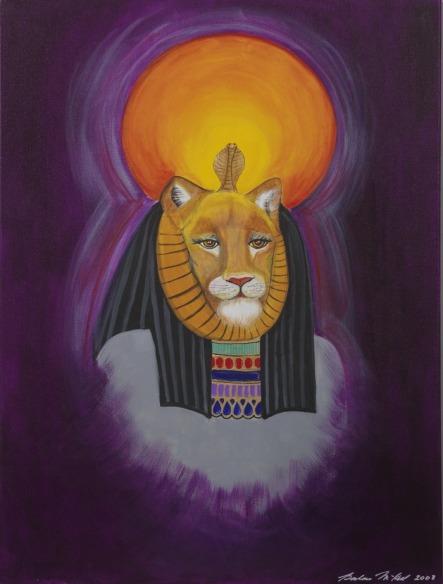 Sekhmet is depicted as a lioness often with a woman’s body. She is the fiercest hunter known to the Egyptians; they say that her breath created the desert. To this day her statues and images are found in abundance in the temples of Egypt. She bears the solar disk, and the Uraeus associates her with royalty. She is seen as the protector of the pharaohs  and  as the Avenger of Wrongs. As the one with bloodlust, you do not want to displease her.

This face of the Goddess revealed herself to me when I was in Egypt. She opened my eyes and my heart with her fierce compassion and grace.

Comments:
"Barbara…how BEAUTIFUL Sekhmet is!!!  I was so excited to unroll her majestic image, and when I did the power of her soul came through with such Royal Beauty…it was with a loss of words I could experience her majesty and strength.  Johnny was there when I unveiled her and he was so astonished to feel such pure galatic vibrations coming through and from her image."
Leslie Sloan , Creatrix of the Auracles Colours www.auraclescolours.com 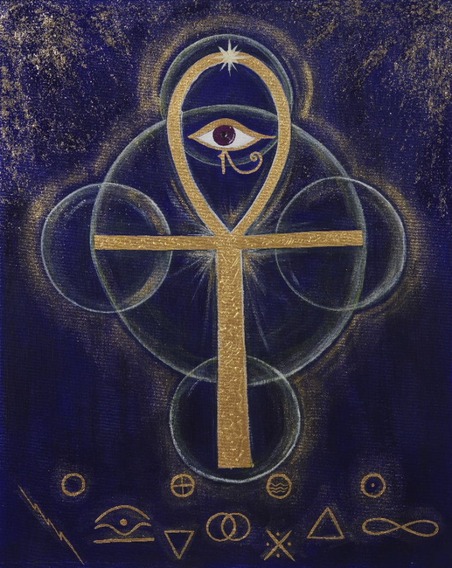 Egyptologists called the ankh the symbol of life. There are few symbols more commonly met with in Egyptian art than this. the ankh has come to symbolize life and immortality, the universe, power and life-giving air and water. Its key like shape has also encouraged the belief it could unlock the gates of death.
The eye of Ra in the center of the ankh is an ancient symbol of protection and power.

This painting was inspired by my trip to Egypt. It represents my connection to the LANGUAGE OF LIGHT, which was activated by  the temples, symbols, hieroglyphics and art of Egypt. 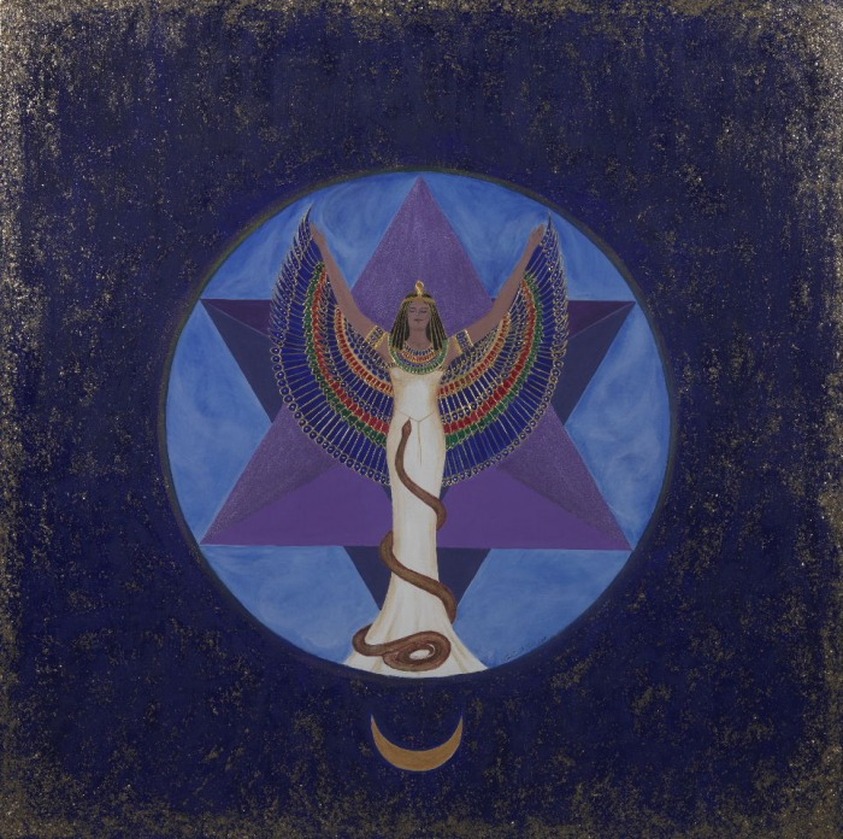 ​Isis is known as the goddess, from whom all beginnings arose. She is the embodiment of feminine power and creative force. Isis is a revered goddess in Ancient Egyptian beliefs and is celebrated in their mythology as the ideal mother and wife, patron of nature and magic; friend of slaves, sinners, artisans, the downtrodden, kings and Queens. She is the one who listens to all prayers.

The Great Goddess ISIS came to life within my heart and mind in 2004. In 2006 I took the time to honour the love I hold for her with this painting. It was through her gentle prompting that I made a journey to Egypt in 2007 and spent time in the Temple of Isis at Philae.


This painting oversees Barbara's healing space. The  Original piece is not for sale. 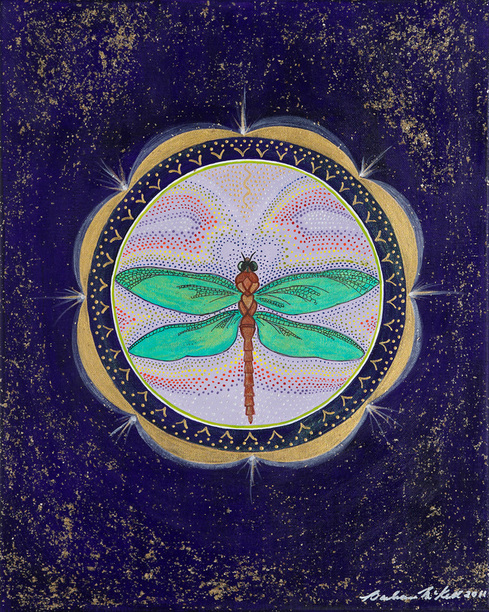 In the Spring of 2011 my Niece passed away at a young age. She left behind what seemed to be a lot of unfinished business as well as two little daughters.

While butterfly was a very significant symbol at her memorial service, dragonfly came to me many times in the months that followed her death. Each time dragonfly appeared I would think of Odessa and she would challenge me to explore things at a deeper level. "Dragonfly Magic" is about the magic i experienced in my encounters. Dragonfly came to me on the wings of love, sparkly bright and magical.

The philosophical theories and models of chakras as centers of energy were first documented in Ancient India. A chakra is a center of activity that receives, assimilates, and expresses life force energy. The word chakra literally translates as wheel or disk and refers to a spinning sphere of bioenergetic activity emanating from the major nerveganglia branching forward from the spinal column.

There are seven of these wheels stacked in a column of energy that spans from the base of the spine to the top of the head. They bring our spiritual bodies into the physical and act as databases for feelings, experiences and perceptions.

The chakras correlate to levels of consciousness, archetypal elements, developmental stages of life, colors, sounds, body functions, and much, much more.

This painting is inspired by my journey into Chakras as a map for healing, spirituality and evolution.

The Return of the Bird Tribes 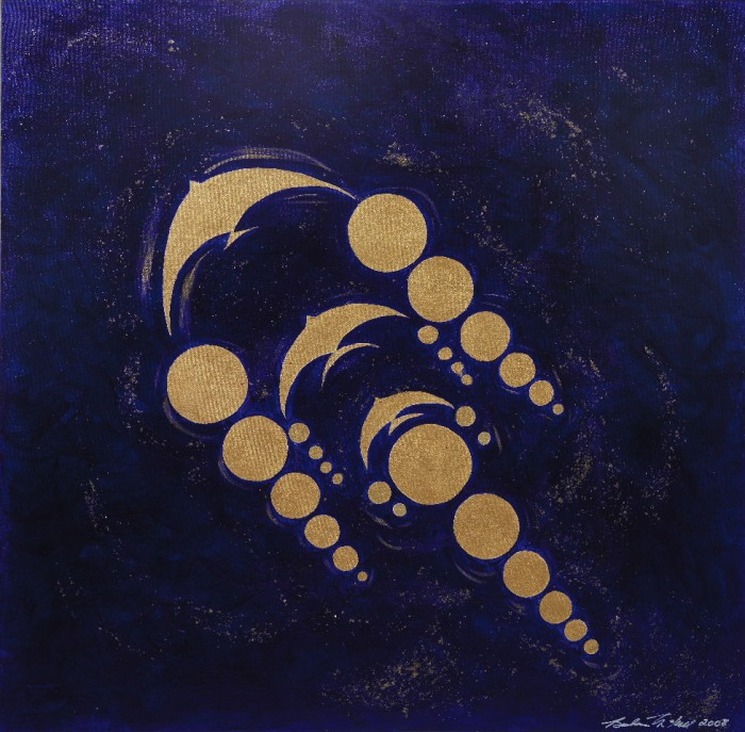 I was so struck by the crop circle formation which appeared in the crop circles in 2003 that I wanted to laugh, cry, dance and sing all at the same time. I titled this painting “Return of the Bird Tribes“ because I knew that was the message... we had finally elevated our consciousness to allow these great beings to return to the  Earth plane.

I have since discovered and read Ken Carey’s book “Return of the Bird Tribes” which offered me an understanding of The Bird Tribes and  why I chose this title for my painting.

During a two hour activation ceremony in the Great Pyramid of Giza I had an awareness of how the geometry of the pyramid transmits and receives information from the cosmos. The infinite power of thought and our connection to all we perceive, think and do, moves out into the infinite and has a profound effect on all of creation…  “Every thought  is a prayer.”